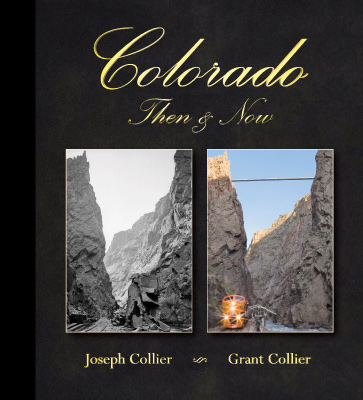 Two decades ago, Grant Collier embarked on a project that had him following, quite literally, in the footsteps of his great-great-grandfather, the pioneer photographer Joseph Collier. He traveled throughout Colorado taking photographs from the exact same spots where Joseph captured his images over a century before. In 2001, Grant released a book of these photographs entitled "Colorado Yesterday & Today."

"Colorado Then & Now" is the sequel to this book, and it contains 200 new photographs. These images capture, in stunning detail, the changes that have occurred in Colorado over the past 145 years. They depict breathtaking landscapes, from the glacially-carved peaks of the San Juan Mountains to the remarkable rock formations along the Front Range. They show early stone structures and towering steel skyscrapers in Denver, boisterous mining camps in the Rockies, and wagon roads, railroads, and modern highways built through steep valleys and over rugged mountain passes. Accompanying these images are essays on six regions of Colorado, along with a biography on Joseph Collier.

"If you love history and Colorado pick up 'Colorado Then & Now' and see the story of this state through the eyes of a single family who witnessed first hand the striking changes humans have wrought on this majestic land." - Lance Maggart, Sky-Hi News


Here's a selection of sample pages from the book (actual book is 204 pages):


Here's some more images from the book. Move the center slider to compare before and after images.


Garden of the Gods